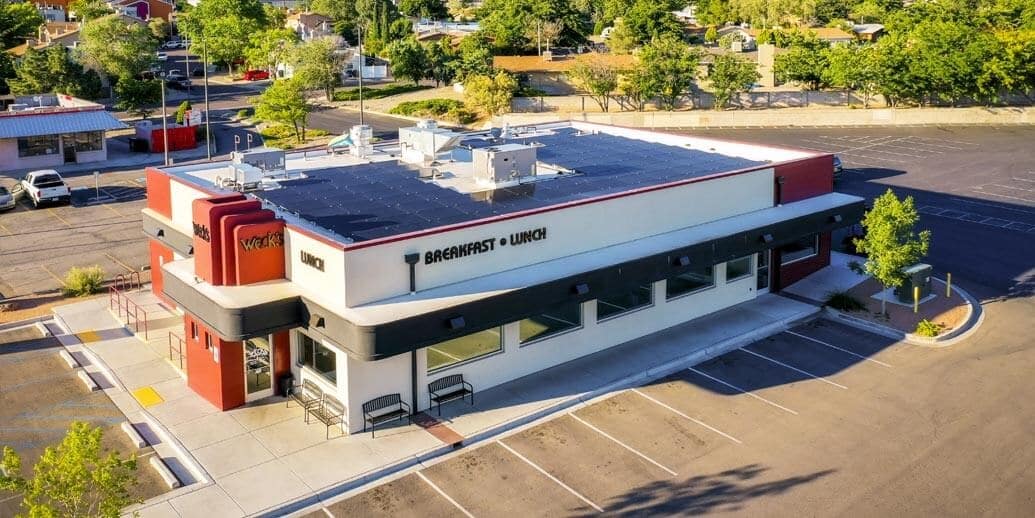 In the Land of Enchantment, you don’t have to weigh the huge cost of a complicated solar installation against your monthly savings, juggling numbers to figure out if you’ll come out ahead — and how long it’ll take — before you decide to pull the trigger and go solar. That’s because New Mexico solar incentives are some of the best in the nation, and businesses and homeowners alike are responding in droves.

Indeed, in the 2019 fiscal year, the state saw a 1,300 percent increase in revenue for solar energy lease payments over 2018 and has also seen solar power grow across more than 200,000 homes, employing over 2,000 New Mexicans in the state’s burgeoning solar industry. And according to the American Jobs Project, a nonprofit think tank, solar jobs will more than triple in the next decade as almost 7,000 solar-related jobs will be created in the state.

But for all the talk of solar power, much of the discussion has centered around residences, leaving business owners wondering if New Mexico solar incentives apply equally to entrepreneurs as they do homeowners. The good news is that the incentives do, and the state’s 10 percent solar installation cost credit can be redeemed by homes and businesses alike until the program expires in January 2029. The cap is $9,000 per system for both business and residential installations, and it applies to any solar energy system installed after March 1, 2020.

It’s all the doing of the New Mexico Solar Market Development Tax Credit, also known as the New Mexico Solar Tax Credit, which was passed by the state’s legislature and signed into law by New Mexico Governor Michelle Lujan Grisham, which extended the state’s 2016 program significantly. That said, the entire program has an annual allotment of $8 million, so the earlier you apply the more likely it is that you’ll receive your full tax credit.

Not to be outdone by private industry and residences, Bernalillo County showed its commitment to renewable energy by unveiling a new solar installation at the Metropolitan Detention Center that accounts for a fifth of the facility’s power. Additionally, the city of Albuquerque has pledged that within four years the city government will strive for 100 percent renewable energy usage, and there’s also a push in the state for 20 percent of retail power to also be renewable.

What kind of rebate or credit should you expect?

But if you’re considering a solar installation, what kind of rebate or credit should you expect?

First, there’s the federal investment tax credit, which allows up to 26 percent of the entire system cost to be credited to business owners. Unlike other caps that quickly approach a maximum and may expire over time, this credit has no cap and will equal more than a quarter of the entire system cost, plus installation. This, combined with the Modified Accelerated Cost Recovery System, which allows for a significant tax deduction in the first year, can reduce a business owner’s solar installation costs by about half.

Business owners are also encouraged to apply for USDA grants, specifically the USDA Rural Energy for America Program, which can help pay for up to a quarter of the total solar system cost for agricultural and rural small businesses. Additionally, with C-PACE, or the Commercial Property Assessed Clean Energy financing program, going solar has never been more affordable, and a 20-year, long-term loan with no upfront costs could mean payments so small they’re negligible. The best part about these low payments is that you’ll likely save more per month on solar than the payment itself, which means your solar installation may start paying for itself in the very first month, or shortly thereafter. Even if you decide to sell your building or office space, the added value of a solar system means more money in your pocket for you and your business.

Combine all of that with the New Mexico solar incentive of 10 percent (up to $9,000) and you could receive credits of up to 75 or 85 percent of the entire installation cost, with the remainder easily covered by a long-term loan under the C-PACE program. When it’s all said and done, you could be out of pocket $0 with the possibility of actually making money on your solar installation in the first month or two.

But if you’re considering going solar, it’s important to know types of systems are eligible for credits and loans. While each system is slightly different, all photovoltaic and solar thermal systems are eligible, which includes grid-tied commercial PV systems and active solar hot water or hot air systems. Unlike residences that are able to do off-grid systems, all commercial solar installations must be grid-tied, and off-grid installations will not be covered. To qualify, all systems must be certified by the New Mexico Energy, Minerals and Natural Resources Deportment, and it’s important to note that solar pools or hot tub heaters are not eligible.

Here at NM Solar Group, we’re crazy about solar! From residences to small businesses and even large-scale jobs, we believe that solar power is the future for the state of New Mexico. As the second-sunniest state in the nation, New Mexico has over 300 days of scorching sun a year, which could help us produce over a thousand times more renewable energy than is currently the case. Unfortunately, today, only about five percent of our state’s power is generated by solar, so we’ve got a lot of room for improvement.

Founded in 2015, NM Solar Group has grown from our first office in Albuquerque, New Mexico to Alamogordo, Las Cruces and El Paso, Texas to better serve the local communities that have responded to the call for solar. Providing custom solar solutions for both homes and businesses, it’s never been cheaper and easier to go solar, especially with the New Mexico solar incentives available to business owners and homeowners alike. And because we’ve been involved with countless solar installation projects, with all kinds of roofing styles, even flat and tile roofs, you know the job will be done right, on time and on budget.

If you’re interested in the best that New Mexico Solar Group has to offer, contact us today to get a free quote and get started on your first steps towards energy independence!